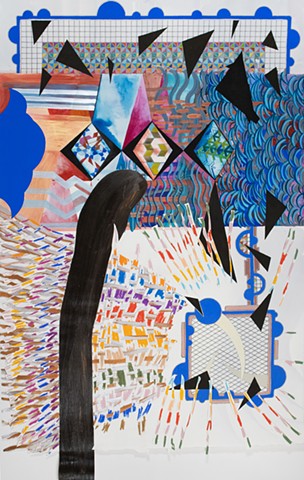 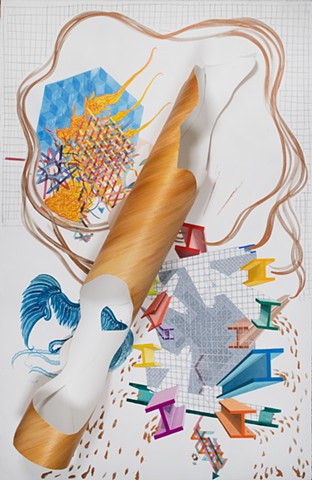 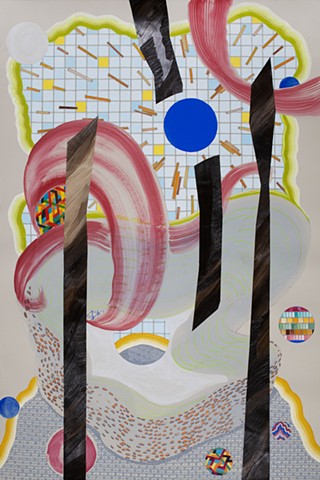 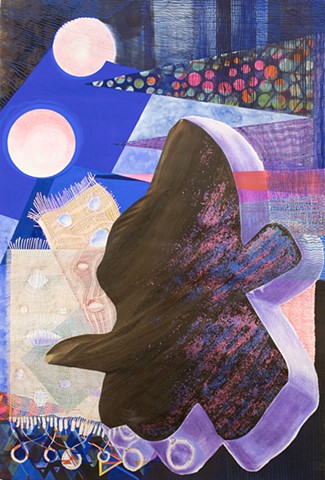 MIDDplace is four artists – Melissa Manfull, Ilga Leimanis, Doreen Wittenbols, and Diyan Achjadi – each with independent practices that include works in drawing, painting, printmaking, animation, installation, and performance. Currently dispersed between the US, Canada, and the UK, we met in graduate school in Montreal at Concordia University many years ago. In 2019, we reconnected, via emails and texts and Instagram messages, to propose a long-distance, mail-based collaborative project. This is the first time that the four of us have come together in an expansive, collective effort to navigate drawing, making and thinking together across time and space.

This collaboration is an experimental direction, allowing us to come together through drawing as a mode of inquiry into hybridity, asynchronous space, domestic space, networking and otherness. It has also given us the opportunity to expand on the possibilities of what may be understood as “mail art” by working collaboratively across vast physical distances and on a relatively large scale. MIDDplace has become an energizing force that lives in our studios and homes alongside our solo practices, infusing our singular and collective works with new potentialities.

The project is a series of works made across time and space through drawing, painting and collage. Conceived as a short-term and singular experiment to be completed in the first half of 2020, the project took on new significance as the global pandemic interrupted and impacted all our lives. In the midst of this time of anxiety, isolation, not-knowing, and fear, MIDDplace became essential as a mode of connection across the continents. As the pandemic heightened the sense of physical distance, and necessarily replaced in-person modes of engagement into digital platforms that flattened diverse experiences into Zoom screens, the materiality and tactility of our dialogue offered a sense of embodied connection that was uplifting and joyful in otherwise difficult times. In addition, the way that this process has stretched our studio practices – allowing us to respond to, learn from, and challenge each other’s visual propositions; it has energized us. This exhibition includes collaborative works, individual works, and documentation of process.

As individual artists, we have established practices that are distinct from each other. Los-Angeles-based Melissa Manfull uses intricate pen and ink drawings to explore natural and man-made systems. Her current series uses isometric perspective as a constraint to visualize two-dimensional patterns as architectonic environments. Montreal-born Ilga Leimanis is a London-based visual artist, educator and author working in drawing, often collaboratively. Recent series attempt to visualize the energy of overflow and abundance, collaborations include research into walking art, drawing on 16mm film and process-based action to generate hope. Born in Jakarta, Indonesia, Diyan Achjadi’s practice incorporates a maximalist visual language that embraces pattern, ornamentation and decoration as carriers of culture and history, informed by the textile traditions of the island of Java. Working primarily in drawing, printmaking and animation, Diyan lives and works in Vancouver. Doreen Wittenbols, a Dutch-Canadian visual artist, is trained in the tradition of figurative painting. Her practice has become increasingly experimental to include abstraction and painting onto a variety of surfaces such as books, postcards, photographs, mirrors, as well as, producing installations. Doreen is currently based in New York. While our practices are discrete, we each work with drawing and painting as modes of thinking and being. In addition, we each explore concepts of space in our works, whether they be liminal, psychic or physical spaces. Our collaborative endeavor is a series of four 47.25" x 31.5" drawings. We each began one drawing on this large, flat sheet of paper with what we identified as a spatial question, using any material and process. Each foundational inquiry was then mailed from artist to artist in a predetermined sequence until the discussion was concluded. We agreed that any response was acceptable and embraced, including working on top of, erasing, cutting into, weaving and collaging. As the drawings moved through the chain and the marks accumulated, each has become a record of this visual dialogue. While there are visible traces of each hand, the final works embody a collective voice, creating a new form that none of us could have imagined on our own. Documentation of process is also part of the exhibition, as well as artworks created individually as a response to the collaboration, including sculptural works. We have recorded a series of virtual studio visits, conversations between us where we discuss our approaches to the drawings, our relationships to each other, and the specificities of our contexts during this time. These conversations will exist on an online platform as a supplement to the exhibition. The forms of negotiation that are core to collaborations are a practice towards building spaces of possibility that embrace multiplicity and difference. At the heart of MIDDplace is a desire to find points of synchronicity in an asynchronous and disjointed world.

Diyan Achjadi is a Jakarta-born, Vancouver-based artist who explores the ways that surface ornamentation and illustrated printed matter can function as archives documenting the circulation of ideas in visual form. They have exhibited widely at galleries and film festivals across Canada and beyond. Recent projects include Hush, an animation commissioned by Emily Carr University for the City of Vancouver Public Art Program (2021); NonSerie (In Commute), part of How far do you travel?, a year-long exhibition on the exterior of public buses, commissioned by the Contemporary Art Gallery (CAG) in partnership with Translink BC (2019); and Coming Soon!, a monthly series of prints installed at sites slated for construction and development, commissioned by the City of Vancouver Public Art Program, documented with a book-length publication in 2020. Diyan was a 2021 recipient of the VIVA Award from the Jack and Doris Shadbolt Foundation, and has forthcoming solo exhibitions at the Nanaimo Art Gallery and the Burnaby Art Gallery. Diyan is currently the Interim Dean for the Faculty of Culture and Community at Emily Carr University. Ilga Leimanis is a Montreal-born visual artist, educator and author based in London. In addition to her solo art practice and collaborative work, Ilga’s practice-led pedagogy and creative consultancy has brought her into contact with many diverse groups of students, both in the UK and internationally. For over a decade, she has facilitated workshops in sketching and idea generation, developing a functional method for creative practice. Associate Lecturer at University of the Arts London, she is also currently pursuing an MA in Academic Practice at UAL, research interests include idea generation, ethics of care, and transformational pedagogy. Her first book Sketching Perspective was published by the Crowood Press (2021). Recent collaborations include an independent virtual 16mm film research project hosted by not/nowhere and presented at the Paul Mellon Centre (2021) and ‘sisters hope’, a series of process-based interventions to generate hope together with her sister Andra Kalnins at Five Years (2022). Los Angeles based artist and educator, Melissa Manfull uses intricate pen and ink drawings to create disorienting spatial illusions through the expansion and dismantling of natural and man-made patterns. Her methodical approach to layering lines, washes and flat forms unite to create complex, often overwhelming three-dimensional spaces. Her work has been exhibited in solo exhibitions at Taylor De Cordoba and Five Years in London. Her select group exhibitions include “Straddling the Boundaries” and “Witty and Urbane” at the Fellows of Contemporary Art, “Gravitas” at Brand Library and Art Center, “Structure Synthesis” at Irvine Fine Art Center, and “Abstracted Visions” at Cerritos College Art Gallery. She is included in the public collections of the Huntington Library and Art Collections, the Art in Embassies program as well as the collections of Google, Microsoft, Media Math and more. Doreen Wittenbols (Breda) is a Dutch-Canadian visual artist, based in New York City. She works in specific series or projects, both single session observational paintings and longer exploratory projects involving abstraction, varied surfaces, installation, performance and ephemeral art. Her life and work have been greatly influenced by frequent moving, from immigrating to Canada as a child to returning to The Netherlands as an adult. Transition and transformation are recurrent themes: the poignant reciprocity of souvenir and memento mori evokes fugitive, vulnerable, ambivalent states for the artist. Wittenbols exhibits throughout Canada, the UK, The Netherlands, New York and most recently Paris and Santa Fe, New Mexico, where she also resided. Recent paintings are featured in the 150th juried issue of New American Paintings. For her upcoming residency at the Van Gogh Huis in Zundert, The Netherlands Wittenbols will explore the commodification of Van Gogh’s work through the concept of the souvenir.